Hey, all. If you're already a veteran launcher builder, forgive me as I'm focusing on new builders today. And if you are a new builder, grand, glad to have you here! This is both a guide and a set of instructions. Guides and instructions will be appropriately labeled. If you're interested in learning how to build launchers, I suggest you filter by the "guide" label and follow them in order from oldest to newest. I'll show you how easy it is to jump in and work your way up to more complicated builds.

Today's build is based off a launcher I saw on YouTube when I first started building. I honestly don't remember the creator or where this video is now, so if anyone knows, do let me know so I can properly credit them. I take no credit for this design. We're going to dive right in and get right to building. Afterwards, I'll explain some of the basics to help you understand the fundamentals of projectile launchers. 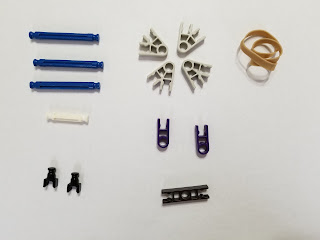 In the future, I will break steps up and have more thorough descriptions, but this build should be easy enough I'm just going to trust that you can follow along with the pictures. I will label the individual components for referencing later. Just to note, this is designed primarily for right-handed people. If you're left-handed, mirror the steps to build a left-handed version.

Congratulations on finishing your first launcher! It's that simple. Now, before we get to firing it, here's an obligatory warning not to point this at anything you don't intend to shoot, living things especially, even if it's not currently loaded. I don't assume any responsibility for any damage you may cause.

Alright, I hope you're excited to already have your first launcher built. If you're content to follow instructions, that's as far as you need to go. But if you want to build your own launchers in time, then I suggest you learn some of these concepts so you can figure out how to apply them yourself.
That's it for now. I hope you're motivated to come back and see what else you can learn to build.
Posted by Dunc at 9:44 PM