Since Oodammo was the de facto best ammo to use, I used it for a lot of other experimental launchers. None of these were ever posted.

First up we have a "compact" nameless Oodammo launcher. I believe I had developed this after the Oodammo 2 but before the 3. I came up with a trigger system that allowed me to easily separate the trigger and the sear along a yellow block body type launcher. I wanted to demonstrate this trigger so I made this.

The gist of the trigger is that it allowed the magazine to be just in front of the trigger but allowed a full draw on the grey rod length striker. While I used this sort of trigger on other designs, I wasn't too fond of the design as an Oodammo launcher and didn't keep it around long. That said, I did reuse the body with minor modifications to fit it with a turret. Turrets and especially a launcher called the TR had been taking off for a bit. I wasn't too fond of turrets but I decided to try one out.

In hindsight, for a turret launcher, this was actually pretty compact after all. But since it was designed as a pistol, it still more or less wasted the potential of the turret. I still didn't like the design and so I think I scrapped it fairly quickly.

My next bit of randomness was something fairly simple.

This was just a mini Oodammo pistol I made for the heck of it. I just liked the idea of having some really small and piece efficient launcher people could mass produce for small indoor battles or something.

Then we have the Oodassault 4 candidate. At the time I thought the Oodassault 3 had limitations due to the design that could only be solved by having a larger body. I was taking development of this very seriously, asking for feedback from other builders on what they wanted in the "ultimate" Oodammo pistol.

To its credit, it did have some features the 3 didn't, such as a striker lock, a realistically angled handle, and a fuller striker draw. The striker was a weird concept I had that didn't turn out. The ends of strikers need to be reinforced to handle the force of smacking against the back of the launcher, else the striker rod will disconnect and fly out the barrel. My concept was that if I attached extra connectors in such a way that they absorbed the shock instead of the connection between the rod and connector, I wouldn't need to add stuff on the striker rod itself to absorb the shock. Sadly, I was wrong, and the extra weight created quite a snapping sound and reverse recoil. As for the launcher, while it had potential, it wasn't quite reliable enough and I just didn't like the larger body. But it would influence a later design. 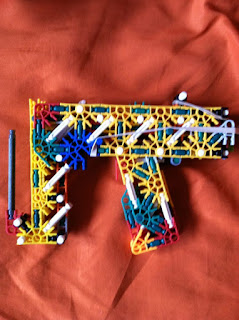 This was Duncan's Easy, Random Pistol, or the DERP. I believe I built it my first year of college when I had free time in my dorm room. It's funny because it accomplished more than the would-be Oodassault 4 did, but by the time I built it, I had moved on and actually found this launcher somewhat "pointless" compared to other options out there. This one used removable magazines and was set up more reliably. It's also interesting to note that other than to make a place to put the rubber bands, this could've been created without any blue rods sticking out of the sides, something I liked about the Oodassault 3's design. So if I had to seriously consider a different design over the Oodassault 3, I would fix up the DERP and maybe post this later.
Posted by Dunc at 7:09 PM