As we went over in the last post, I had always wanted to design a bolt action but could never quite design one that satisfied me. Other builders had long since made their own personalized bolt action launchers and I didn't figure I could really do anything different from theirs. However, that changed.

I had been out of college, with a job, living with a friend and coworker, but I still wanted to keep building with K'nex, so I'd have spurts of activity every now and then. One day I noticed how the teeth of gears fit in the grooves of rods. I kept experimenting until eventually I came up with a rotary magazine, which is a cylindrical magazine that uses sprockets to hold and feed the rounds. I later figured out I wasn't the first to come up with the idea for the magazine design, but it had never yet been used in a practical launcher yet. While it was meant to be a novelty, the nice features of this sort of magazine is that it holds a relatively large amount of ammo (10-12) compared to vertical magazines of the same height, and it's comfortable to use as a foregrip.

I struggled, but I was determined to make a launcher for a bigger version of it. I figured, well, I always wanted my own bolt action, so I might as well design a bolt action since the magazine would probably get bad range as a direct load repeater anyway. And so I began designing the Barackuda (portmanteau of Barack [Obama] and barracuda).

This was the first prototype before I had all the details worked out. I needed to figure out how to make the magazine removable and add a decent stock. But I was really pleased with how the design was turning out because my style was to make things compact and sleek. I continued working on it and after a few modifications I came up with this:

It worked nicely but I felt like the stock was awkwardly long and it didn't get as much range as I liked. Plus, reloading the magazines took a bit of time. As you probably know about me by now, I'm an iterative improver. Later on, I would get more pieces and rebuild the design to make more improvements.

I redesigned the stock and made little tweaks here and there. I just wasn't still quite ready to post it, so I'd keep tweaking it for a couple years whenever I got back into building again for short spurts. I'd eventually get my own house and find myself with more time and space to build in, so I made my final iteration: 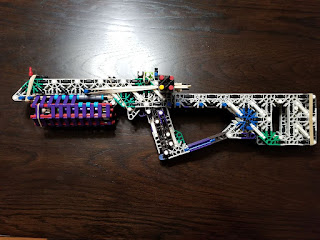 By now I had made a better stock, more reliable trigger that helped get better range, an easier to load drum magazine (gears since removed since they didn't help), a shorter muzzle to make muzzle loading single shots easier, more precise sights, and a safety system. I was really pleased with how far it had come, but likewise I couldn't get over my perfectionism. I finally got a handful of pictures to help others build it and then destroyed it to work on other projects. However, me being me, I've been thinking of revisiting it and then posting full instructions here.