Here's a shorter post for today. In my early days, I liked to design launchers based on real firearms. Ultimately, I realized I wasn't that good at it, but one of my last creations before I stopped altogether was a couple launchers based on the UMP-45.

I liked its design, and its size was within the realm of possibility for me as a piece-limited builder. The main challenge for me was making a magazine with a similar angle. So I set out and came up with this:

It wasn't bad, but there were many things I'd later not like about it. For one, I couldn't come up with a good skeleton stock design, so I made up a solid one. Another thing was the front end was a touch too short. The handle was also awfully flimsy. Regardless, it was a very popular K'nex build on Instructables for a bit, one of the most highly rated ones. The one feature I was proud of was the slanted removable magazines. I used an unconventional attachment style to accomplish it where it was rocked in AK-style rather that inserted straight in.

It was bugging me how not quite accurate my original one was, so I decided to have another go a couple years later. I liked it so much that I'd end up building it again in college and tweaking little details, which is pictured below. 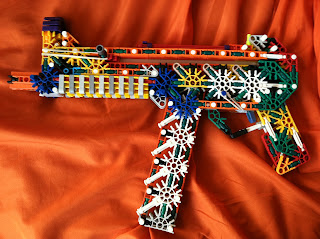 Ironically, this one had the opposite problems. Instead of having an incorrect stock, it just lacked on entirely. It was also perhaps a touch too long instead of short, but I felt this represented the UMP better. I did something a little different with the striker. It protrudes out the left side, the idea being that it'd be similar to using the charging handle on the real one, though not nearly as realistic. Ultimately this resulted in it getting less range, but it was never meant to have good performance anyway.

Like many other launchers of mine, I've long considered how I might redesign and improve the UMP if I ever revisited it. I'd give it a proper stock and clean up the design at least, but I'm not sure what I'd want to do about the striker + charging handle situation. Perhaps I'll figure that out and have some new instructions to post eventually.
Posted by Dunc at 6:30 PM