(Update 1/9/2019: I found pictures for a couple other models I intended on showing here)

While I intend to design functional launchers most of the time, sometimes I just like to make things that look cool, typically designed to look like it could be based off a real firearm, but isn't. You'll notice I have a certain style I stick to while making such designs, evolving over time slightly. Here are a few.

This was actually one of the very early launchers I made, and a lot of the design elements went into the AK-47 model I attempted. Technically, I think it was setup to launch projectiles, but it performed so pitifully and I couldn't be bothered to improve it. It was just designed for the sake of looking like a cool sniper rifle though based off of no real one in particular.

Y'now, sad thing is I'm pretty sure I've had more examples in between here, but because they never functioned, I rarely bothered getting picture since they were mostly just for my own amusement and not to display. 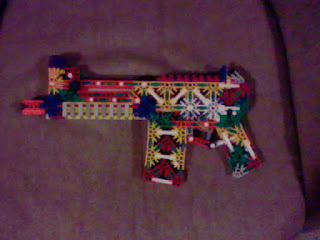 One example I do have pictures for was basically my UMP-45 body adapted to take a magazine for assault rifle ammunition to look like a compact subcarbine type firearm. I carried some design elements over into future mock models.

Technically this is based on a concept firearm (the Magpul PDR), and technically it was intended to launch projectiles originally, but I think it's important to show this just to see where I got inspiration for future designs from. I really liked the design of the PDR, and I even bought an airsoft version of it eventually, but before I had the money to do that, I tried replicating it. Ultimately, I didn't succeed, but I came up with a functional removable magazine setup. At some point, as you can see, I also figured out how to attach airsoft accessories to K'nex for making attachment rails and scope mounts. 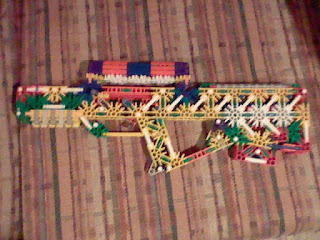 I'd end up turning the design into something more custom. I added a fake charging handle above the handle and I made what I intended to be a carrying handle scope, but it was mounted too low to give you room to hold it. I also added a small section of foregrip that would allow you to add a vertical grip.

This isn't the first version actually, but ultimately the last evolution of what was based on the PDR design, cleaning up the last custom model I made. As you can see, it uses the same magazine setup. It had a charging handle above the handle but setup differently, a removable front sight, and a section of K'nex rail for sighting accessories. It used an elongated version of that grip from the UMP (which I actually got from someone else, though I don't remember who) that allowed you to attach vertical foregrips. This would be a reoccurring design element.

This was a silly one which was basically just turning the above model into a traditional layout with a skeleton stock. The magazine rocked in AK style in this one. I didn't really like the design of this one.

This one was called the SMRI, which never actually stood for anything it was just meant to be pronounced "Samurai". It was basically reattempting what I wanted with that previous model but doing it much cleaner. It had a straight in magazine but an AK-style charging handle/mock bolt carrier. The magazine didn't lock in, though, so I wasn't entirely pleased with this design. It had top and side rails for airsoft accessories and again a removable front sight for using sighting accessories.

Funnily enough, I wanted to make the SMRI a functional launcher at some point, so tried to get some help in doing so, but ended up accepting it wouldn't work well and left it nonfunctional. This isn't quite the latest version, but there have only been some minor changes since this photo. I did come up with a really slick removable magazine setup in this one with a functional mag release lever. The stock design comes from a user The Red Book of Westmarch and is adjustable. The rear sight also folds down. Since it was originally redesigned to attempt launching projectiles, it has an ambidextrous charging handle striker that works with the trigger. I like this design so much I've still have it around, never having the heart to destroy it, still thinking of trying to make it functional someday.

This was a launcher I was halfheartedly thinking of making function, but I just couldn't be bothered to finish it since it was designed more around the looks anyway. It took some design elements from the SMRI and the magazine connection method from the UMP. It was basically designed to look like an internally silenced SMG. I think I named it the Ninjato to keep in theme with the SMRI, thinking about making it a full series. There was otherwise nothing else special about it. 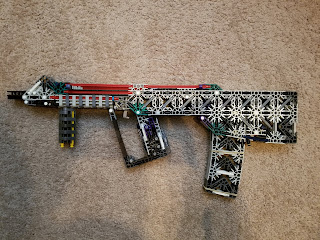 Last one. I made this not all too long ago actually. It's kinda funny how I kept flipflopping. I originally made bullpups, then I made a traditional layout model of the bullpup, but then I improved the design with the SMRI, but then I wanted to basically make a bullpup version of the SMRI. However, as I designed it I decided instead to design something with the mentality of making it as compact and sleek as realistically possible, following design cues from real compact bullpups like the AUG, MDR, and MTAR. As such, I put the charging handle underneath the top rail and snug to the foregrip. I used the SMRI's better magazine system in the PDR's stock. It was a sleek design that I liked and considered trying to make functional somehow, but it'd be difficult without compromising the looks. I still had the SMRI around too, so I eventually destroyed this so I could work on other projects.

These probably won't be the end of it either. Sometimes I just like to design something without worrying about it firing or not. Which one is your favorite? Have you designed any nonfunctional launchers just for looks? Let me know.
Posted by Dunc at 6:41 PM