In real firearms, shotguns fire shot, or spherical lead balls, typically multiple ones at a time. The clear benefit of having multiple projectiles fired at once is increased hit probability. Likewise, K'nex launchers can be set up to launch multiple projectiles at once for the purpose of increasing the chance of hitting something (or someone in a war).

If I haven't already explained (and perhaps this deserves its own post), my personal view on effective war weapons is that emphasizing range is vain since K'nex simply aren't designed to fly far distances let alone accurately. I always figured a more effective strategy would be to increase output to maximize hit probability and overwhelm opposition up close when they were running low on ammo. So, I had an interest in making practical shot launchers. If you've seen my previous post on Assault Pistols, then the following is already familiar to you.

At first, it was about making a semi-realistic shotgun shell as seen on the left. But making a design that fired them was difficult. So instead I made an easier to use flat shell that held 6 green rods. I made a relatively simple launcher to fire the shells. You loaded the shells in through a crude gate on the side of the front. It was novel, and the 6 green rods provided a lot of spread, but being limited to one shell at a time didn't make it all that practical for a war weapon. 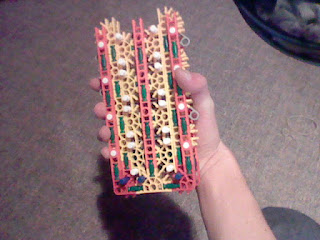 I wanted to figure out a repeating design, which is challenging because you need to both load multiple projectiles at once and then be able to fire them all cleanly. One method I was considering was basically making a magazine for the shells I mentioned earlier. However, this would be difficult and would not hold that many shells at all for the size of it. 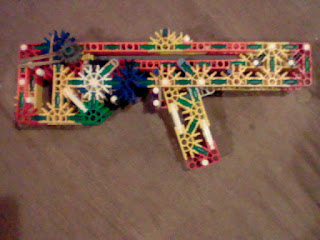 Eventually I came up with a simple concept where the striker had a connector in front of it, sticking out the sides, allowing it to hit 3 rounds at the same time all loaded from a 5 layer magazine. It actually had pretty good spread, definitely would've provided a benefit in a war. But it was more of a concept design, functional but not at all clean enough for me to want to post it. I requested that someone else clean up the design for me and make it into something postable.

User TheFoofinator kindly did me the favor of improving and posting instructions for my concept naming it the Basic Shot Weapon (BSW).

I was really pleased with his results, but I was skeptical with the concept after more thought, the striker being a weak point of the design. It also resulted in rather large launchers that took up more pieces than I had available. So then I tried out a concept to make a shot pistol.

I realized I didn't need the full striker length to be open. I could have a part just behind the magazine with limited movement that transferred all force of the traditional striker across 3 projectiles. This design was based on my DERP launcher. It had potential but I couldn't figure out a good magazine wall for the front that would also act as the barrel. The result was that the rounds shot downward. Connector ammo, while reliable, also took up more space which meant less capacity. So I tried one more concept out:

This one was based on my Oodassault 3 design, which resulted in a sleeker launcher. However, I designed it to attempt launching white rods, but the magazine just wasn't reliable at all. Rods don't like to stack perfectly vertically. I've since given up on making an effective shot launcher.

A big problem with repeating shot launchers is their limited capacity and awful reload times, making them ill suited for primary use. I figured they'd only be practical as secondary launchers to use alongside a primary. They could either be sidearms like the above examples, or another concept I had but never came close to making was a combo launcher, a ranged-based launcher on top with a repeating shot launcher mounted below, preferably with a large magazine and a pump action to allow overwhelming firepower. The versatility would offer a huge advantage, and other K'nexers would explore similar concepts though often only with single shots of multiple projectiles, limiting their firepower.

Perhaps shot launchers will never be a practical war launcher option. But they're still fun to mess around with. I hope someday I'll figure out a nice concept for a new shot launcher.
Posted by Dunc at 7:43 PM