We have to go DERPer 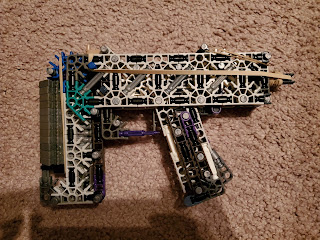 I appreciate your patience, truly. While I've bouts of inactivity, something eventually stirs me. In this case, I've been talking with veterans of the old K'nex launcher community and we pondered different ideas together. I still had the core body of my BAWler lying around and I kept experimenting, trying to make an improved version of the DERP, if any of you remember seeing that from my Part 2 post on my Oodammo launchers. While I couldn't think up anything for a while and put the project on hold, I revisited earlier this week and figured I could share progress.

For those unfamiliar, the DERP was just a casual attempt at an Oodammo launcher with removable magazines, and I was surprised by how well it worked, but I didn't like it as much compared to my Oodassault 3. Its magazine was too goofy and the way it connected wasn't smooth enough for me. That said, remaking it now, I do like it as an alternative, I think it's fun to have a removable magazine option. 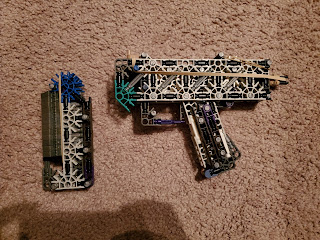 This time I designed the magazine and the trigger guard to allow you to easily slide it straight up into the launcher. It is roofed and has a band such that you can keep them loaded and ready to go without any other manipulations required. The roof doesn't interfere with the striker, so you can insert a magazine into the launcher without having the striker set.

I'm nearly done but I'm having a problem with a round getting dragged out behind the launched round, but I think I've a solution. Once it's working reliably, I'll get a video and instructions.
Posted by Dunc at 11:32 AM